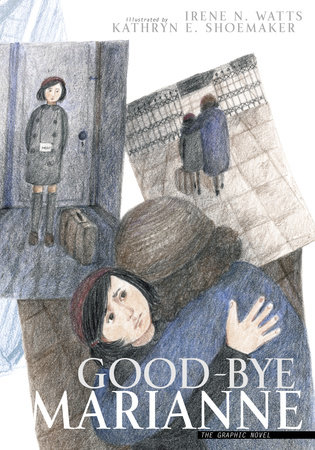 ABOUT THE BOOK
Good-bye Marianne was first published as a children’s novel in 1998, and it has now been reissued in graphic novel format.

Eleven-year-old Marianne Kohn’s world collapses when she and all Jewish students in German State schools are expelled. Her father, ostensibly on a business trip, is, in reality, on the run from the Gestapo. Jewish families find themselves isolated. Marianne hopes that she and thirteen-year-old Ernest Bock, who is on vacation in Berlin, will become friends, but he changes towards her when he finds out that Marianne is Jewish.

After the Gestapo force their way into the Kohn apartment and destroy their home, Mrs. Kohn realizes that she can no longer keep her daughter safe.

A lifeline appears: Great Britain provides the possibility of escape by Kindertransporte, rescue trains for unaccompanied children under sixteen. Marianne is offered a spot on a train bound for England, which means she and her mother are forced to make a heartbreaking decision.

The story begins on November 15th, 1938, one week after the Night of the Broken Glass — Kristallnacht — when synagogues and Jewish homes and businesses were torched or destroyed by order of the Nazi government. Hundreds of Jewish men and boys were arrested.

GRAPHIC NOVEL FORMAT
There are many ways to tell a story. Good-bye Marianne began as a one-act play, and then it became a novel before this present format.

Key features:
Panels — another word for illustrations, and designed to describe the setting and actions of characters. (Not all panels need text. Sometimes the illustration is all that is required to convey the story).

Sound effects — described by words such as BLAST or KNOCK.

Captions — used sparingly for comment or to show the passing of time.

CLASS AND GROUP DISCUSSION QUESTIONS
What are the freedoms we take for granted?

1. Because they are Jewish, family Kohn (and others like them) face many restrictions. Make a list of those you discovered in your reading, and discuss their implications.

2. Did you get your information from the text, illustrations, or from both?

3. Marianne avoids telling both Inge and Ernest her full name because she is afraid of the outcome, should they find out that she is Jewish. In 1936, Jewish and Aryan youth were no longer allowed to mix. Jewish children no longer expected to be asked to birthday parties or to take part in games.

4. Could you think of a situation where you might avoid telling someone your name?

5. Good-bye Marianne has been described as a story about bullying. Do you agree with this description?

6. How can bullying be stopped? In groups, think up strategies for dealing with this form of discrimination and racism.

7. Throughout the book there are illustrations and text examples of racist signs used by the Nazis. Make a list of the examples you found in the book. Below are three slogans that were common in the Third Reich:
Jews Not Wanted. Sign leading into a village, May 21, 1935
This restaurant does not serve Jews. September 1935
Swimming Pool restricted to Aryans only. November 1938

9. Marianne’s father was imprisoned for selling a book by a Jewish author. Many writers, who were considered non-Aryan or who voiced opposition to the Nazi
Party, were banned. Do you think that censorship is ever justified? Explain your answer.

10. How many ways are there to say good-bye? Why do you think Watts chose the title Good-bye Marianne?

11. On page 96, Marianne says “Mother’s don’t send their children away.” What would you have done in that situation? Would you have made that choice?

12. Under what circumstances do you think it is right to send children away? Where in the world today might this still be the only option?

15. As a parting gift, Ernest gives Marianne his prized motor-horn. In what way is this gift of lasting significance? How has meeting Marianne changed Ernest?

CHARACTERIZATON AND NARRATIVE
1. How do you define an act of courage? What are the ways in which some of the characters demonstrate courage?

2. Write an imaginary journal entry for a day in the life of one of the main characters or bystanders in this graphic novel.

3. Discuss people who have made a difference for the better in the world.
How did they achieve this?

4. In pairs or groups, choose an incident or scene from the book to re-enact. The scene should be repeated until each student has had a chance to play all of the characters that appear in the scene.

5. Finish the following phrases:
As (name of character) I felt….I was afraid… I tried… I hoped… I wanted.

A NEW COUNTRY
1. What kinds of problems might a newcomer face alone in a strange and new country?

2. Marianne did not have time to finish her letter to Ruth. Imagine Marianne
has arrived in England, what might she write to her cousin Ruth?

3. Interview someone at home, in school, or in your community who was born in another country and who has had to make a fresh start here in Canada.

4. Perhaps your class might make contact with the nearest Holocaust Education Centre to invite a first or second generation Kindertransporte or Holocaust survivor to speak about their experience.

These are suggestions only. Some activities and discussion topics may not be appropriate for all age groups or classes.

1. Compare chapters one and seven of the graphic novel with the original novel.
What differences do you notice?
What remains the same?

2. How do the illustrations add to your understanding of the story?
Why do you think the illustrator chose to work in black and white, using only pencil as their medium?

3. Can you find some examples of sound and silence within the panels? One striking example is in chapter four, “The Christmas Market,” where after the screech of the truck’s wheels, only the man’s cap remains lying on the snow-covered ground. Choose some of the panels which you find particularly effective without dialogue, where the illustration alone tells the story.

4. Is there one or more panels that you think best evokes the theme of the book? Give your reasons.

5. Choose something you have written, or a story with which you are familiar, and turn it into graphic format. If you prefer, team up with another student. Decide who will be responsible for adapting the text and who will develop the art. The text should be adapted before you or your partner begins the panels. This way, you can decide how many panels there should be, and how the text is to be distributed throughout. Too many words on the page will tire the reader. Use words as sparingly as possible without sacrificing meaning and content.
Share the finished work with the class and discuss the process.

ARYAN: The name used by the Nazi Party to describe people whom they regarded as superior or the “Pure” race.

CITIZEN: A citizen is a member of a state or nation to whom they owe allegiance and loyalty, and in return, the state ensures civil rights i.e. the right to employment, justice, and education.

CONCENTRATION CAMP: On coming to power, the Nazis established camps, where they imprisoned perceived enemies. These included people from all walks of life — Jews, Gypsies, socialists, communists, artists, musicians, writers, actors. These prisoners were starved, overworked, and ill-treated.

EMIL AND THE DETECTIVES: A book by Erich Kästner, Illustrated by Walter Trier. First published in Berlin in 1928, in Great Britain in1931, and read world-wide by children ever since. Erich Kästner was imprisoned because he opposed Nazi policy.

FÜHRER: Meaning leader, a title adopted by Adolf Hitler, the supreme leader of Nazi Germany, who ruled with absolute power for twelve years from1933 to 1945.

GESTAPO: The Secret State Police. A political police unit who were above the law and feared for their brutality.

HAMANTASH: A symbolic food eaten during the festival of Purim. A three- cornered pastry, filled with poppy seeds or fruit preserve. Tasche means “pocket” in German.

HANUKKAH: A Jewish holiday, also called THE FESTIVAL OF LIGHTS.
A candle is lit for each of the eight days of the holiday, in memory of the victory of a small Jewish army over the powerful Syrians who had tried to force them to deny their faith. The ninth candle of the Menorah, the nine branch candelabra, is used to light the others to symbolize the sharing of love and light.

HEIL HITLER: When Hitler came to power, the traditional greeting of “Good Day” was replaced by law with this greeting.

HITLER YOUTH: In 1936, the Hitler Youth and German Girls’ League became compulsory for all Aryan young people. Between the ages of 10-14, boys joined the Junior Corps and girls, the League of German Girls. At age fifteen they were promoted to the Hitler Youth. Parents could lose their children to the state if they refused to cooperate. The children were indoctrinated with Nazi ideology. They were encouraged to denounce those who disagreed with Nazi principles, including their own parents.

KINDERTRANSPORTE: Great Britain offered entry visas to children under the age of sixteen. This was a direct result of the impact of Kristallnacht. Children traveled without their parents, and only a few adult supervisors were allowed on board; but they had to promise to return to Germany. On arrival, children were fostered or put up in hostels. Only a few had friends or relatives to take them in, most had to stay with strangers. The first train left Berlin on December 1, 1938. The kindertransporte continued until the outbreak of war nine months later. Almost ten thousand children, Jewish and non-Jewish, at risk from Germany, Austria, and Czechoslovakia were rescued. After the war, most children had lost one or both parents and
many relatives. Only 7% of Jewish children in European countries under Nazi occupation survived the Second World War.

MUTTI: A Jewish word for “Mom” or “Mommy”

NAZI: Name for the National Socialist German Workers’ Party, led by Adolf Hitler. It was founded in 1920 and came to power in January 1933.

OMA: A Jewish word for “Grandmother”

OPA: A Jewish word for “Grandfather”

PASSOVER: An eight-day festival that commemorates the exodus of the Jews after years of slavery in Egypt

STAR OF DAVID: A six-pointed star that is the traditional symbol of the Jewish faith.

SYNAGOGUE: The Jewish place of worship, the home of prayer and the center of the community. More than 190 synagogues were destroyed in Germany and Austria, during the night of the Broken Glass.

REICH: A German word for “Empire.” The First Reich was the Holy Roman Empire, 962-1806, the Second Reich was under the German leader Bismarck 1871 to 1890 and the last was Hitler’s Third Reich.

VISA: Entry permit to another country. At the end of 1938, there was a waiting list of over 250,000 Jews waiting to enter Canada or the United States. Most of them waited in vain.

Been There, Done That: School Dazed
Mike Winchell

Beyond the Doors
David Neilsen

The Story of Crime and Punishment
AB Yehoshua

The Century for Young People
Todd Brewster and Peter Jennings

Anastasia on Her Own
Lois Lowry

The Story of the Nose
Andrea Camilleri

Charlie and the Grandmothers
Katy Towell

Here Where the Sunbeams Are Green
Helen Phillips

Wilma Tenderfoot: the Case of the Frozen Hearts
Emma Kennedy

Danger at the Fair
Peg Kehret

A Home for Foundlings
Marthe Jocelyn

The Case of the Dirty Bird
Gary Paulsen