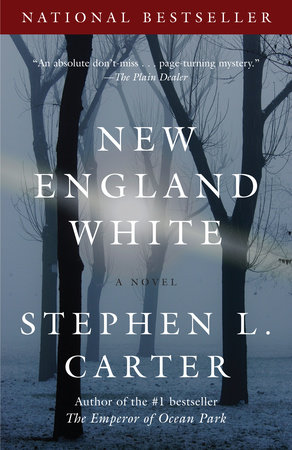 The introduction, questions, and suggestions for further reading that follow are designed to enhance your group’s discussion of New England White by Stephen L. Carter. Set in a New England university town, it begins with the murder of an eminent African-American professor and explodes into a gripping investigation of race, power, and politics in America.

Lemaster Carlyle, the president of a prestigious university, and his wife, Julia, a deputy dean at the university’s divinity school, are driving home from a fund-raising dinner when a dangerous curve on a snowy road sends them careening into a ditch. As they await help, they discover a bloody body by the side of the road. Their initial horror escalates when they realize that the dead man is Kellen Zant, an economics professor at the university. Lemaster and Kellen had engaged in some very public conflicts. Julia’s relationship to Kellen runs deeper: they were lovers years ago, and recently Kellen had become intent on drawing her into his life again. Now Julia is haunted by their last encounter. Three days before the murder, Kellen had told her, “I’m in trouble. . . . You’re the only one who can help” [p. 64-65].

The police launch an investigation into Kellen’s murder. But not everybody is content to accept the official findings. The secretary of the university, eager to protect the school’s reputation, asks the head of campus security to make discreet inquiries. An ambitious reporter accosts Julia, insisting that Kellen was killed because he was working on a project that could destroy a major political figure. Lemaster’s cousin, an aide to a presidential hopeful and U.S. Senator, is sure that Lemaster, a good friend of the current president, has the information Kellen was so avidly pursuing. When the district attorney uncovers disturbing links between Kellen and Vanessa, the Carlyles’ troubled daughter, Julia is spurred into action. Her attempts to figure out what Kellen was doing stirs up a decades-old scandal and exposes a conspiracy that puts Julia and her family in the direct line of danger.

A fast-paced novel of murder and mystery, New England White is also brilliant portrait of the black elite who have made it to the inner circles of the white establishment and will do anything to protect their position and their power.

1. What does the portrayal of the Carlyle family reveal about the complexities of the African-American community? In what ways does their life represent the historical divide between the entrenched upper class and immigrants and other strivers in American society? What do the beliefs and attitudes Julia grew up with reflect about the specific history and traditions of wealthy, successful blacks? Do they differ from the attitudes of upper-class whites? If so, why do you think this is the case?

2. When the police question him, Lemaster says that although he had berated Kellen for spending more time consulting with private corporations than on serious scholarship, reports of a feud between them “was media silliness, hunting for stories to make African Americans look bad” [p. 24]. Do you think this is a fair claim about the media? If you are familiar with the much-examined controversy between the noted African-American writer and critic Cornel West and Harvard University president Lawrence Summers, discuss the parallels between the two situations. Can you think of other examples of the media’s tendency to focus on the racial aspects of events they are covering?

3. Boris Gibbs remarks to Julia “the racism your people have to face these days is depressing” [p. 29], and her best friend Tessa forgives her own ex-husband’s unfaithfulness by saying it was “simply a need all black males possessed, born of centuries of racial oppression, to liberate themselves from the repressive strictures of bourgeois sexual custom” [p. 62]. What do these “sympathetic” statements show about the assumptions made by whites? Do you agree that many white intellectuals are guilty of “quick, sloppy racial judgment” [p. 62]?

4. Mona disdains both Kellen and Lemaster because “neither of them [is] really quite one of us” and also objects to Julia’s raising her kids in an all-white suburb [p. 35]. Is her criticism hypocritical, given the choices she has made in her own life?

5. How would you describe the Carlyles’ marriage? What is the significance of Julia’s explanation of their relationship-“He forced me to fall in love with him . . . I didn’t have a choice” [p. 18]? Based on their conversations, as well as the descriptions of life in their household, is Julia justified in “wondering if her husband even liked her, or viewed their marriage, as he did most of life, through the stultifying lens of duty” [p. 96]?

7. What elements of a traditional mystery novel help drive New England White? Consider Carter’s use of such conventions as cleverly coded messages, misleading statements by witnesses or suspects, and false conclusions about the motives and interests of various characters.

8. Compare and contrast the way Julia and Bruce Vallely conduct their investigations. What advantages does each one have in gathering information and putting the pieces of the puzzle together? Why is Julia reluctant to share her findings and feelings with Bruce? Could either of them have solved the case alone?

9. How valid is Lemaster’s perception that “both parties [have] moved . . . far from any real interest in the future of African America” [p. 117]? What was your reaction to his saying, “You know what the trouble is? The Caucasians aren’t afraid of us any more” [p. 117]? Compare this to Astrid’s argument that “the best of our people reach a certain level of success, and they decide that they have moved beyond politics” [p. 102]. Which statements most accurately reflect your own impressions or opinions?

10. Is Carter’s portrait of a top-notch university realistic? How does he use humor and satire to bring various aspects of the academic community to life? Discuss, for example, Bruce’s meetings with Trevor Land and his interview with Arthur Lewin [pp. 177-91], as well as Julia’s encounters with her dean and other colleagues at the divinity school.

11. In addition to her obsession with Gina Joule, what role does Vanessa play in the novel? How and why does her relationship with Julia change over the course of the book? What insights do her attitudes and behavior provide, either implicitly or explicitly, into the confusion and ambiguities that upper-class African Americans face in white America? What do the portraits of Preston and Jeannie reflect about the same issues?

12. Mitch Huebner says, “You look at any town in New England, Mrs. Carlyle, and you’ll find a line down the middle. On one side are the people who don’t know the secrets. On the other are the people who’ve always been there, who hold on to the town’s history like the roots that keep the trees standing” [pp. 346]. Discuss how the division between those who know the secrets and those who don’t applies not just to the events in Tyler’s Landing, but to the novel as a whole.

13. Byron Dennison is proud that he taught Lemaster and other protégés “about power. How to use it. When” [p. 379], and goes on to say that power should not be used in pursuit of justice. Do the events in the novel support his point of view? Are there instances that contradict it? In light of both historical and contemporary race relations in this country, is the way the Empyreals use their power understandable? Is it ethical or is it a corruption of the values, however elusive, that define a civilized society?

14. Miss Terry represents a part of the African-American community far removed from the world Julia knows. Do her attitudes and opinions [pp. 423-27] express a reality the majority of African Americans-including those who have “made it”-experience? If, as Miss Terry maintains, “the white folks get to set the rules,” does the responsibility for changing this lie within the African-American community [p. 426]? Talk about the different ways prominent public figures, both black and white, have approached this issue and how they relate to questions raised in New England White.

15. A variety of mirrors turn up as clues during Julia’s investigation. Using Mona’s argument that “the people in the mirror aren’t free at all. . . . They just do what the people on this side of the mirror let them do” [p. 489] as a starting point, why is the mirror an appropriate symbol for the themes the novel explores?

16. Julia ultimately recognizes that Lemaster’s “politics were the politics of pure and perfect righteousness” [p. 608]. What do Julia’s decisions regarding her future reveal about what she has learned of the ways in which power, idealism, and purely practical considerations affect both personal lives and politics realities?

17. In addition to racism, both blatant and subtle, what other biases do the characters confront? What light does the novel shed on how gender, economic status, and professional stature distort our perceptions of ourselves and others?

18. In his widely discussed nonfiction book, Reflections of an Affirmative Action Baby, Carter addressed the impact of programs designed to promote racial equality in this country, including the pressure on black professionals to behave in a “politically correct” manner. In what ways is this thesis revisited in New England White? Do you think fiction is an effective tool to explore-and help clarify-real-life issues?

Stephen L. Carter is the William Nelson Cromwell Professor of Law at Yale University, where he has taught since 1982. He is the author of the bestselling novel The Emperor of Ocean Park, and seven acclaimed nonfiction books, including The Culture of Disbelief: How American Law and Politics Trivialize Religious Devotion and Civility: Manners, Morals, and the Etiquette of Democracy. He and his family live near New Haven, Connecticut.

The Scent of Rain and Lightning
Nancy Pickard

Do Unto Others
Jeff Abbott

The Rich Shall Inherit
Elizabeth Adler

Wife of the Gods
Kwei Quartey

Wish You Were Here
Jodi Picoult
Back to Top