An Audience of Chairs Reader’s Guide 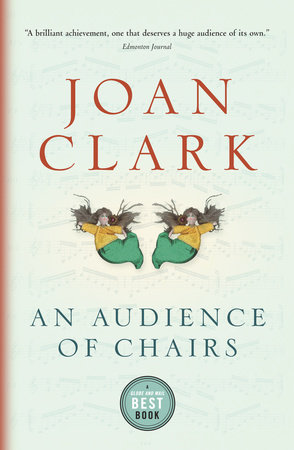 An Audience of Chairs Reader’s Guide

1. An Audience of Chairs opens as Moranna is in middle age, looking back on the pivotal moments in her life, and anticipating what she hopes will be a positive reunion with her daughters. Discuss Clark’s use of flashbacks scattered throughout the chronological narrative – how did they affect the experience of the novel’s unfolding for you?

2. Moranna agrees to marry Duncan, at least in part because she wants to leave her job at the Big Barn theatre. She feels thrilled that “by executing a perfect exit, she had embraced her destiny and was about to begin the following act” (p. 88). There are many other examples in the novel in which Moranna thinks of her life in terms of the theatre. How do you think this relates to her illness?

3. Discuss the significance of the title, An Audience of Chairs. How do audiences figure in Moranna’s life? What other audiences does she have? Why are the chairs empty? Could they have been filled with flesh-and-blood people, had things gone differently in Moranna’s life?

4. What do you think of the actions of Moranna’s family when they intervene after the children are left on the island? Did they have any other choice? What would you have done?

5. Speaking with her neighbour and friend Lottie, Moranna quotes William Cowper’s line, “There is a pleasure in madness” (p. 60). What do you think of this statement, given what happens in Moranna’s life? Does Moranna find pleasure in her madness? Does it outweigh the pain?

6. Though they may not acknowledge they have much in common, Moranna and Bun are both scarred by the loss of a parent. How do you think the absence – or larger-than-life status – of these role models affected their individual developments? How do you think it has affected the way they relate as a couple? Who else in the novel has been affected by an absent parent?

8. Moranna works hard to ensure that her inner reality overshadows the outer world in her life, however she often finds herself “distracted” by world events. What impact does the outer world have on her mental state?

9. An Audience of Chairs is deeply rooted in its Maritimes setting, however Moranna has had her share of travels. Discuss the sense of place in the novel.

10. In one scene in which Moranna plays Chopin on the silent piano board, she “feels she’s searching for an antidote to the immense sadness that is at the heart of his work, and her life” (p. 119). Will she ever find her antidote? Does it exist? What happens when she finally plays a working piano again?

11. Though there is much sadness in this novel, it also has some deeply funny moments. Discuss what you found humorous in the novel, and why.

12. Moranna resists the label “biopolar,” instead preferring to describe her mental illness using the metaphor of extreme weather. “She also rejects the idea that her emotional weather might have been passed on to her by her mother, because to admit it opens the possibility that she might have passed the same weather on to her daughters, who reside in her memory as perfect and unassailable children” (p. 116). What do you think of this denial? Note her eldest daughter Bonnie’s eventual career. Do you think Moranna’s mother’s sad legacy will persist?

13. The novel is told via a third person omniscient narrative, often delving into the thoughts not only of Moranna, but into those of the people in her life. How do you think this choice of narrative perspective impacts the telling of the story? Could it have been told any other way, for example as a first person narrative, in Moranna’s voice? How would this have changed the story? Who else could have been the narrator?

14. Costumes figure prominently in Moranna’s life. Discuss some of her costume choices throughout the novel and how they reflect her various moods and mental states. At the novel’s close, she removes a costume. What is the significance of this stripping down?

15. Moranna is deeply flawed, but she is undeniably brilliant and funny. Would you have her as a friend? What about as a dinner guest? Have you ever had anyone like Moranna in your life?

Learn More About An Audience of Chairs
print