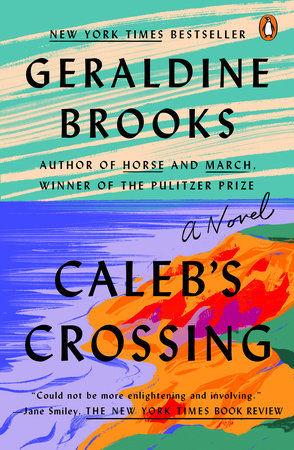 Living in the isolated Puritan settlement of Great Harbor on Martha’s Vineyard, Bethia Mayfield, the bright young daughter of the local minister, balances her strict religion with a passionate love of nature and a growing curiosity about the culture of the Wampanoag tribe that populates the island. When Bethia secretly strikes up a friendship with a young Wampanoag named Caleb, she unknowingly begins a journey that will shape her life. Intelligent, independent, and kind, Bethia is the narrator and the heart of Geraldine Brooks’s stunning new novel, Caleb’s Crossing, the story of Caleb Cheeshahteaumauk, who in 1665 became the very first Native American to graduate from Harvard.

Torn between her commitment to her religion and her family and her longing for freedom and intellectual fulfillment, Bethia is a young woman built of contradictory desires. With Caleb, she finds an escape from her stern and pious community in which women are expected to be silent and subservient, the community that denies Bethia an education simply because of her gender. But for all the freedom that Caleb inspires in her, he struggles to understand her dogged sense of duty and deference. Even as he chooses to adopt her religion, he encourages her to rebel and questions the obedience at the root of her faith.

Their relationship is soon upended as Caleb comes to live with Bethia’s family so that he can be groomed to enter a preparatory school in Cambridge along with her elder brother, Makepeace. Living under the same roof yet forced to keep their earlier friendship hidden, Bethia watches Caleb blossom under the tutelage she so craves. When a tragedy befalls the Mayfield family, Makepeace’s hope for entering Harvard suddenly rests on Bethia’s shoulders, demanding that she sacrifice her pride and her freedom to make his education possible. The shifting boundaries of Bethia’s complex and profound relationship with Caleb change with their arrival together in Cambridge; as he enters school, Bethia becomes an indentured servant, and while their lives move in markedly different directions, their friendship endures.

Caleb’s Crossing follows Bethia and Caleb from Grand Harbor to Cambridge and beyond, charting not only their crossing of the stretch of ocean between island and mainland but of the vast—and sometimes unbridgeable—expanse between Native American and white settler, between pagan and Christian, and between male and female. Brooks has built a world of emotion, struggle, and natural beauty in which the balance between the traditions of the past and the potential of the future are captured in the lives of two young friends.

Geraldine Brooks is the author of six books, including the novel Year of Wonders and the nonfiction workNine Parts of Desire; her second novel, March, won the Pulitzer Prize for fiction in 2006. Earlier in her career, Brooks was a foreign correspondent for The Wall Street Journal and was stationed in Bosnia, Somalia, and the Middle East. Born in Australia, she currently divides her time between Martha’s Vineyard and Sydney.

A CONVERSATION WITH GERALDINE BROOKS

Q. In writing a historical novel such as Caleb’s Crossing, what is the balance between detective work and pure imagination? Could you briefly describe your research and writing process?

I like to follow the line of fact as far as it leads, so I do a vast amount of research. But I always make sure that the story drives it, which means I wait for the narrative to tell me what it is I need to know. So I write for a while, then go to archives or to interview experts, then I come back and incorporate what I have learned into the fiction. I don’t always follow the facts—sometimes the story needs to veer away from them for a while. And that’s why I always include an afterword, to set out the truth as far it is known and to show where my novel has deviated from it.

Q. Your first novel, Year of Wonders, also takes place in the seventeenth century. What is it about this time period you find so inspiring? Did any of the information you gained researching that novel help your work on Caleb’s Crossing?

It is a rich period to me because the modern mind is emerging from the medieval mind, and you can sense the struggle. When you read some of the writings of people who lived in the mid-seventeenth century, they are recognizable—you understand their predicaments, you get their jokes. Yet at other times you encounter minds formed by a worldview quite alien to our own. It’s the time Newton is shaping modern scientific thought, and yet witches are still being burned at the stake. I was familiar with all this from Year of Wonders. Anna Frith’s small community was largely puritan—the kind of people who might have taken ship for the new England colonies if they’d had the means.

Q. The relationship between the white settlers and Native American population has always been a difficult one, and the creation of the Massachusetts colony still has political ramifications today. As someone who didn’t grow up in the United States, what is your relationship to these events? Are there comparable events in Australian history?

Australia too has a brutal history of dispossession of its Aboriginal inhabitants. But as I was researching the book, I was astonished to discover that I have a direct ancestor who almost certainly knew Caleb. My some-number-of-greats grandfather was Ephriam Cutter, a glazier in Cambridge in the 1660s. His sister was the wife of Elijah Corlett, the schoolmaster who prepared Caleb for Harvard. So I had a closer relationship to these events than I had ever imagined.

Q. As you note in the afterword, the facts of Caleb’s life are barely known. What was it about his story that made you think it had the potential to be a novel?

The questions: Who was this remarkable young scholar? How did he get to Harvard? What was Harvard like in the 1660s? And on, and on. As soon as I learned of Caleb, I was intrigued, and I found that I couldn’t stop thinking about him and speculating on what his experience might have been.

Q. Both Caleb and Bethia are placed in set roles by society because of his race and because of her gender. In looking at their respective journeys in the novel, would it be fair to say that Caleb’s struggle is to exist between two worlds while Bethia’s struggle is to try to flourish within one?

Yes, I think that is a very apt way to describe it.

Q. As a narrator, Bethia creates a warm and intimate relationship with the reader, despite the formal structure and vocabulary of her seventeenth-century English. How were you able to develop such a unique and historically accurate voice without compromising the reader’s ability to relate to her?

It took a long while to feel assured about her voice because there are no female diaries extant from that period to draw upon, to prime the pump, as it were. But in the end, after reading what I could in verbatim court records, letters, wills, and other documents, she did begin to speak to me. After that it’s a kind of channeling that goes on. I just hear the voice very clearly.

Q. Bethia mentions being inspired by the accomplishments of the poet Anne Bradstreet. This is not a name most readers might recognize. Were you familiar with her work prior to writing the novel?

Yes, I was because I love poetry and read it voraciously. She is North America’s first published poet, after all. She deserves to be celebrated!

Q. While we get hints from Bethia as to what she’s like in her old age, how do you see the rest of her life progressing after the events of the novel? What could Caleb have accomplished had his story not ended so early?

I think I have let Bethia speak for me on this. He might have had an immense impact. The fact that Thomas Danforth, who was an esteemed jurist and political leader, had charge of him at the time of his death is highly significant. Danforth would not have been involved unless Caleb was considered a promising young man. And Caleb’s own achievements as a scholar support that view.

Q. As a writer, your work includes both fiction and nonfiction, covering seventeenth-century America to modern life in the Middle East. As a reader, are your interests as broad or do your tastes remain more constant? What is your favorite book?

At this moment in my life I would have to say Gilead by Marilynne Robinson. I do read widely, including children’s and young adult literature, which I read to and with my sons. I admire these books a great deal because they understand the virtues of great plotting and the fundamental importance of story.

To be quite frank I think my greatest strength as a journalist was being able to talk my way into tough situations and put up with uncomfortable conditions for weeks on end. If you could actually show up—be there for the coup or the firefight or the disaster—that was 90 percent of it. The events were so dramatic, the human predicaments so poignant and tragic, it didn’t actually require much skill to write about them.

Q. What is your next project?

Another historical novel. And that’s all I have to say about it at this point.

Hotel on the Corner of Bitter and Sweet
Back to Top