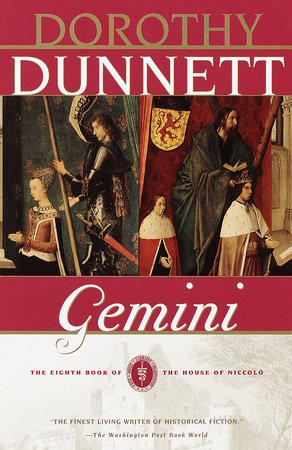 The final volume in the spectacular House of Niccol?. Scotland, 1477. As Nicholas de Fleury and his clever wife Gelis move between the countries where his bank has made its mark (Burgundy, Flanders, Germany, France, and England), he finally unlocks the door to his past–but not before his physical strength, his willpower, and his humanity have been tested to the breaking point by royalty, the gentry, the clergy, and his own family. A dazzling conclusion to this vivid re-creation of the early Renaissance.

"They were more than halfway towards becoming friends," says Nicholas of his two sons. What had made them enemies? As Jordan and Henry stepped tentatively and poignantly towards friendship, which do you think made the greater effort? Which made the greater achievement?

2. What are the links between the story of the Duke of Gloucester, soon to become the infamous English King Richard III, and that of Alexander, Scottish Duke of Albany? Are theirs at some level the same story? How do they diverge?

3. At the climax of this novel, and this series, Nicholas de Fleury finally kills a member of his family. What are the elements that make up what Kathi now calls his "obsession" against doing this? What do you think enables him to do it at last?

4. In its final quarter the novel devotes considerable attention to Jordan de Rebeirac. What enlightenments about him invite our understanding, and even our pity? What does Bel mean by insisting that he and Nicholas are alike? What is his final tragedy?

5. In their final scene together, Anselme Adorne says to Nicholas, "I wish–" and is cut off. How would you finish that sentence? How is Adorne’s role in the Scotland of this section of the novel similar to his role in the Bruges of the early chapters? And different from it? What are some of the reasons he is "at home" in Scotland?

6. For Discussion: The House of Niccol?
Throughout the eight books of the House of Niccol? series a picture emerges of Sophie de Fleury, the mother of Nicholas, and of her centrality in the life of her son. Can you put this picture together now –the Sophie of rumor and gossip, the Sophie of Nicholas’s slowly revealed memories, of his maturer judgement, of Andro Wodman’s reporting? Are there still some mysteries and obscurities in this portrait?

She has also led a busy life in public service. In the past, she has been a member of the Board of Trustees of the National Library of Scotland, a Trustee of the Scottish National War Memorial, and Director of the Edinburgh Book Festival. She has also served on numerous cultural committees, and is a Fellow of the Royal Society of Arts. In 1992 she was awarded the Office of the British Empire for services to literature. She lives in Scotland and has two sons and one grandson.
Learn More About Gemini
print

The Spring of the Ram
Dorothy Dunnett

The King’s Daughter
Sandra Worth
Back to Top