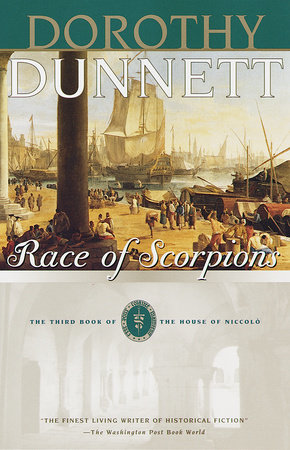 At the age of 21, Nicholas finds himself in limbo. His beloved wife has died, his stepchildren have locked him out of the family business, and his private army is the target of multiple conspiracies. And both contenders for the throne of Cyprus–the brilliant Queen Carlotta and her charismatic, sexually ambivalent brother James–are demanding his support. Walking a tightrope of intrigue, Dunnett’s hero juggles adversaries and allies, from the delectable courtesan Primaflora to the Mameluke commander Tzani-Bey al Ablak, a man of undiluted evil.

1. For Discussion: Race of Scorpions

What are the key ingredients in the nature of James of Lusignan, king-in-the-making, of Cyprus? Will he be a better king than his sister Carlotta? What are some of the forces that bring Nicholas vander Poele to take a hand in this making? Does his recent equivocal experience in Trebizond influence Nicholas here?

2. When we first see Katelina van Borselen she is conversing with the troubador King Ren? of Anjou while he is painting an illustration of his recently written allegory on the theme of "The Heart as Love’s Captive." How does this theme frame the relationship of Nicholas and Katelina? How do they each react to love’s captivity at the ancient black cone of Venus in Paphos? The ravine at Kalopetra? The shattered house in starving Famagusta?

3. Nicholas’s great public achievements during his stay in Cyprus are the modernization of the sugar producing processes at Kouklia and the victorious military and diplomatic assault at Famagusta. What did each enterprise satisfy in him? What did he learn from them? What elements of failure are in each of them?

4. The conflicts at this time in Cyprus will shortly produce the setting of the story which Shakespeare will use for his tragedy Othello. What echoes and intimations of this play, its characters and themes, do you find in Dorothy Dunnett’s novel?

5. How does the relationship between Nicholas and the young Diniz Vasquez replicate the nightmare version of Nicholas’s relationship with his family? The ideal version? Why do you think Nicholas brought Diniz to work in the dye factory? How does Jordan de Reberac tarnish this relationship at the end?

7. The House of Niccol? series offers a sustained and in many ways highly sophisticated version of the changes in intellectual, political and psychological structures which mark the transition from the medieval to the modern world. But like any good set of historical novels it abounds too in individual scenes and characters of great emotional, dramatic, and visual power, or stylistic verve, "set pieces" which hang in the memory even longer, perhaps, than the plot or the author’s philosophy of history. What are some of your favorites here–scenes of comic impact or tragic illumination? Best-drawn villain or victim, most vexatious female adolescent? Most breathtaking fight or chase? Most engrossing moment of romance? Most stunning surprise?

She has also led a busy life in public service. In the past, she has been a member of the Board of Trustees of the National Library of Scotland, a Trustee of the Scottish National War Memorial, and Director of the Edinburgh Book Festival. She has also served on numerous cultural committees, and is a Fellow of the Royal Society of Arts. In 1992 she was awarded the Office of the British Empire for services to literature. She lives in Scotland and has two sons and one grandson.
Learn More About Race of Scorpions
print

To Lie with Lions

The Disorderly Knights
Back to Top