We’re All in This Together Reader’s Guide 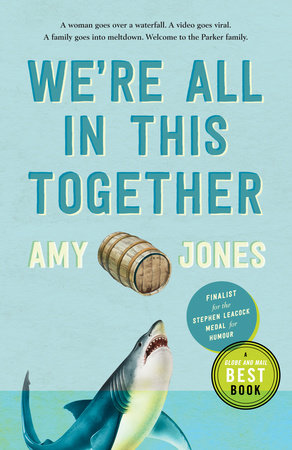 We’re All in This Together Reader’s Guide

print
We’re All in This Together Reader’s Guide

1. Amy Jones tells the story of the Parker family from the perspectives of multiple characters. Why do you think that is? Discuss what you learned about the characters in their own chapters versus what other characters tell you about them. Did anything surprise you in this respect? Why are parts of the story told from Tanya’s, Adam’s, and Anastasia’s perspectives?

2. In different ways, members of the Parker family feel outside of or apart from the family, even in one another’s presence. Why do you think that is? Discuss what it means to be a Parker. Is there any Parker who feels a sense of belonging? Does anything about the Parker family remind you of your own family?

3. How do themes of familial bonds and broken loyalty manifest in We’re All in This Together? How do members of the Parker family deal with betrayal? Is there anything a character does in this book that, if it were your relative, you wouldn’t be able to forgive?

4. Family systems theory posits that families are an emotional unit comprised of individuals who do not operate in isolation from the family system. Each person has a role to play. What is the emotional quality of the Parker family? What roles in the family do various characters play? Explore how these roles shift throughout the course of the novel.

5. Though Finn is isolated and does not seem to like her life in Toronto, before she leaves for Thunder Bay she worries if she will be able to return to her life there. Do you think she wants to go back to Toronto after visiting her family, or does she really hope something will keep her in Thunder Bay? What does she need from the people in her hometown?

6. When Finn sees Nicki’s children for the first time in three years, she feels jealous of the twins’ closeness and regrets having left London behind when she left Thunder Bay. Finn’s response to Ross is more complicated. What do her reactions to Nicki’s children tell you about Finn?

7. Describe Walter and Kate’s relationship. Why did Kate ask Walter to marry her? Was she happy in their marriage? Walter fell in love with Lake Superior when Kate was in Europe and it became an almost deific force in his life: “He was certain that he was meant to make serving Lake Superior his life’s goal. To thank it for giving Kate back” (91). What does the lake offer Walter that Kate does not?

8. Shawn’s closeness to Finn bothers Katriina. Are her fears valid and/or validated? When Shawn wakes up at Hanna’s house, he says he’s “frequently disturbed by how much she looks like Katriina – a younger, blonder, hippie-chick Katriina – but right now he finds it comforting. It’s like being with his wife without having to actually be with his wife” (151). Why doesn’t Shawn respond compassionately to Katriina when she tells him she’s lost the baby?

9. Katriina finds a kind of solace in the Paulsson house, though it is the site of both crisis and catharsis for her. Explore Katriina’s purchase of the Paulsson house and why she needs it. Why is Katriina fixated on Claudia? In the end, do you think that Shawn and Katriina should stay together?

10. What is the significance of London’s obsession with sharks? Discuss the connection between the prospect of a salt-water shark in Lake Superior and London’s experience in her family and in her community. What characteristics does London share with Finn and with Nicki? Who is she more like?

12. Discuss the character of Nicki. Is she a sympathetic character or someone you can identify with even though she is frequently belligerent? Is Finn fair in her assessments of her twin sister? What redeeming qualities does Nicki have that Finn fails to see?

13. Why does Nicki sleep with Dallas in 2003? How do her reasons for involving herself with him change over time? Why, ultimately, does Finn forgive Nicki for sleeping with Dallas?

14. Describe how each member of the family reacts to Kate’s plunge over the falls. What are the shared sentiments? Is it curious or significant that the Parkers spend little time together at Kate’s bedside? Has Kate’s illness had an effect on how the family responds to her hospitalization?

15. Kate’s condition is something the whole family is tacitly aware of but that none of the adults want to face. What effects of Kate’s memory loss ripple through the lives of the characters in the book? Would anything have been different if the family had been able to face her illness together?

16. Was Kate lucid when she planned to go over the falls? What about when she didn’t acknowledge Finn’s pain after the fight at Nicki’s wedding? (22). When she convinces London that together they will save the shark? (248). All of these actions have significant ramifications for the Parker family. Discuss whether or not Kate’s cognitive function is relevant in regards to the outcome of her actions.

17. Prior to European settlement, the Ojibwe (Chippewa) people inhabited the land that is now Thunder Bay. Today the Fort William Reserve is located adjacent to the city. In 1970, the twin cities Fort William and Port Arthur amalgamated to form the city of Thunder Bay. Were you familiar with Thunder Bay before you read this novel? What did you learn about the city and the region from reading this book?

18. In what ways do Lake Superior, the Kaministiquia River, and the city of Thunder Bay compel and repel various characters? What elements of the geography depicted in the book are integral to the story? Could the story be set anywhere else? Describe what the book reveals about Canadian identification with and connection to the land.

19. “If this were a movie, Kate would always say, and then instead of being sad about life not being a movie, she would just go ahead and make it like one” (154). Is this an accurate interpretation of Kate? “If this were a movie…” is an expression other Parkers use, too. What does the use of this expression suggest about how things are passed through families and down generations?

20. We later learn that in Paris, Lydia said to Kate, “‘If this were a movie, the credits would be rolling right now…’” (286) and we can surmise that Kate inherited the turn of phrase from her. What else have the Parkers inherited as a result of Kate’s relationship with Lydia? Are there things in your life you’ve inherited as a result of events in the lives of your parents, grandparents, and other ancestors?

21. The concept of destiny suggests there’s a force shaping events of the future. Do you believe in destiny? How does destiny affect the Parkers? As a result of Kate’s going over the falls in a barrel, will anything be different for London and her generation of Parkers than it was for Kate and Walter or Finn, Nicki, and Shawn? Will anything be different for the Parker family unit?

Learn More About We’re All in This Together
print

A Single Thread
Tracy Chevalier
Back to Top