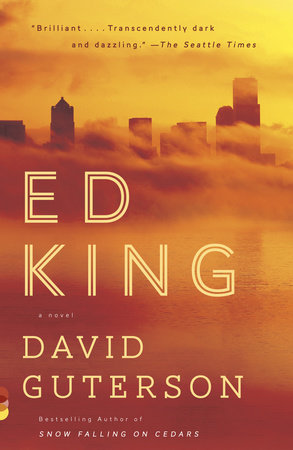 The questions, discussion topics, and reading list that follow are intended to enhance your reading group’s discussion of Ed King, a brilliant modern reimagining of an ancient tragedy by the critically acclaimed, best-selling author of Snow Falling on Cedars.

“David Guterson is a man of many voices, and they all speak volumes.” —The Seattle Times

“A serious and searching craftsman, very much in the American grain.” —Time

“[A] major writer . . . Guterson possesses a remarkable gift for capturing people and places, etching them into the reader’s mind.” —USA Today

A sizzling, darkly funny, propulsive new novel—David Guterson’s most daring yet: a sweeping, dazzling story of destiny, desire, and destruction.

In Seattle, 1962, Walter Cousins, a mild-mannered actuary—“a guy who weighs risk for a living”—takes a risk of his own, and makes the biggest error of his life. He sleeps with Diane, the sexy, not-quite-legal British au pair who’s taking care of his children for the summer. Diane gets pregnant and leaves their baby on a doorstep, but not before turning the tables on Walter and setting in motion a tragedy of epic proportions. Their orphaned child, adopted by an adoring family, becomes Edward Aaron King, and grows up to become a billionaire Internet tycoon and an international celebrity—the King of Search—who unknowingly, but inexorably, hurtles through life toward a fate he may have no power to shape.

A thrilling reimagining of Sophocles’s Oedipus Rex: a riveting new novel that brings a contemporary urgency to one of the greatest stories of all time.

1. In Sophocles’s play Oedipus Rex, a prophecy is made that a newborn prince will kill his father and marry his mother. How did this expectation affect your interpretation of Ed King?

2. The novel diverges from the classic tale in several ways, notably in the fates of Ed and Diane. How did David Guterson make this story his own—and a story for our own time? And why did he change the ending?

3. What purpose is served by the message-board conversations that begin and end the novel?

4. Discuss the role of fate in the novel. Was it possible for things to play out differently or were the major events predestined?

5. The idea of being a visionary, or of being able to predict the future, begins with Walter’s job as an actuary and continues throughout the novel. What point is
Guterson making?

6. Alice pricks her finger on a rose thorn while taking Ed home from the adoption agency, staining his blanket with her blood. (page 60) She sees this as an unhappy omen. In what ways was she right, and how was she wrong?

7. What role does Judaism play in the novel? How does being raised a Jew shape Ed’s personality?

8. How does Ed get over Walter’s death? Why does he stalk Tina, and why does he give up?

9. What makes Diane so obsessed with her looks? Is she a narcissist? Is Ed?

10. At the party thrown by Prophecy, a Tarot card reader tells Ed, “You’re dangerous to the world and to yourself.” He responds, “Don’t make me laugh.” (page 166) Did Ed turn out to be a danger to the world or only to himself?

11. Both Ed and Simon are math whizzes. How do their destinies differ and why?

12. Discuss Club’s betrayal of Diane. Were you surprised by this turn of events? Were his actions—or her revenge—justified?

13. In the novel, there are several types of sibling relationships: adopted brothers, half siblings, and siblings who share both parents. How does a shared bloodline influence their interactions? How is it different in the case of Ed and Simon, who are unaware they’re not blood relatives?

14. When Ed and Diane meet, the narrator pauses to address the reader directly: “Now we approach the part of the story a reader can’t be blamed for having skipped forward to . . . ” (page 236) What was your reaction to Guterson’s narrative choice here? Why do you think he made it?

15. What is the significance of Guido, the pilot, and his anagrams? Is there a secret he unlocks about identity or authorship?

16. Ed becomes known as the King of Search, and he’s seeking to create the “perfect search.” How does Guterson use the idea of search as a metaphor?

17. Discuss the metaphor of Cybil and artificial intelligence. Is Ed playing God?

18. Ed’s last words are, “The entire universe will know my name! The world will remember my name!” How did Edward Aaron King’s hubris contribute to his (literal) downfall?

David Guterson is the author of the novels The Other, Our Lady of the Forest, East of the Mountains, and Snow Falling on Cedars, which won the PEN/Faulkner Award, as well as a story collection, The Country Ahead of Us, the Country Behind, and Family Matters: Why Homeschooling Makes Sense. He lives in Washington State.

Wuthering Heights by Emily Brontë; The Master and Margarita by Mikhail Bulgakov; Cold Mountain by Charles Fraizer; Tom Jones by Henry Fielding; Grendel by John Gardner; Sons and Lovers by D. H. Lawrence; Kafka on the Shore by Haruki Murakami; Song of Solomon by Toni Morrison; Lolita by Vladimir Nabokov; Anywhere but Here by Mona Simpson; A Thousand Acres by Jane Smiley; Oedipus Rex by Sophocles; The Story of Edgar Sawtelle by David Wroblewski.
Learn More About Ed King
print

Setting Free the Kites
Back to Top