The Sirens of Baghdad Reader’s Guide 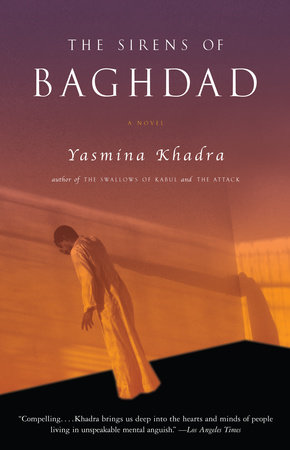 The Sirens of Baghdad Reader’s Guide

“Compelling. . . . Khadra brings us deep into the hearts and minds of people living in unspeakable mental anguish.”
—Los Angeles Times

The introduction, questions, and suggestions for further reading that follow are designed to stimulate your group’s discussion of The Sirens of Baghdad, the crowning work in Yasmina Khadra’s trilogy of novels about Islamic fundamentalism and the war in the Middle East.

The Sirens of Baghdad is the story of one young man’s descent into hell—his journey from innocence to despair, from a peaceful life in a sleepy village to a rage for vengeance in the most violent city in the world. The narrator of the novel is a college student whose studies have been interrupted by the American invasion of Iraq. He has had to return to his desert village, where boredom, scorching heat, and the occasional boiling over of tempers when the war is being discussed are the most serious problems he must face. The war is a distant phenomenon, something they hear about but doesn’t really touch them. That all changes when Sulayman, the local blacksmith’s sweet-natured, mentally challenged son, accidentally severs two fingers and must be taken to the hospital. When their car is stopped at a checkpoint, Sulayman panics, tries to run away, and is riddled with bullets. “Every bullet that struck the fugitive,” the narrator says, “pierced me through and through” [p 57]. But this is only the first of the humiliations and tragedies he must witness. When soldiers come to search the village for suspected insurgents, the narrator watches as his aged father is pulled naked from his bed and thrown to the floor. The disgrace of this moment engender in him a need to wash away in blood the humiliation his father has suffered. This is the turning point that sends him down a path to terrorism and destruction.

In Baghdad he finds a decomposing city, a city that had “broken from its moorings and gone adrift, fascinated by its own suicidal rage and the intoxications of impunity” [p. 148]. Wandering the streets, homeless and penniless, he sees firsthand the destruction and despair of the Iraqi people, and his desire for vengeance grows more and more intense. When he joins up with young men from his village, his cousin, Sayed, and the dictatorial Yaseen, the narrator sets himself on a trajectory that will take him right up to the brink of global catastrophe.

Written with all the taut narrative suspense of a thriller, but with a depth of political and psychological understanding rare in literature of any genre, The Sirens of Baghdad enables readers in the West to see—and more importantly to feel—what it is like for ordinary Iraqis to live in a war-torn country, a country under siege from within and without. It is, in the end, both an act of witness and a profound exploration of the heights and depths of human nature.

1. What does The Sirens of Baghdad reveal about the Iraq war and its effects on ordinary Iraqis that news reports do not fully convey? In what ways does it challenge, complicate, or confirm conventional narratives about the war?

2. As The Sirens of Baghdad opens, the narrator describes Beirut as a sleepwalker and says that “according to ancestral tradition, a somnambulist is not to be interfered with, not even when he’s headed for disaster” [p. 1]. Is the narrator himself a “somnambulist”? Is he “interfered with”? Does he awaken?

3. During a heated discussion about the war, Sayed tells Yaseen a story about an Egyptian strongman. He begins by saying, “When I was a child, my father told me a story I didn’t completely grasp. At that age, I didn’t know that stories had a moral” [p. 64]. What is the moral of the story Sayed tells? How does it relate to the larger story of The Sirens of Baghdad? Does the novel itself have a clear moral?

4. After they have been betrayed, Yaseen furiously interrogates the narrator, in order to find out who led the police to them. “It was the age-old story: When you can’t make sense of your misfortune, you invent a culprit for it” [p. 224]. What is the broader significance of this statement?

5. What are the major turning points that transform the narrator from an innocent young man with an aversion to violence to a fully committed jihadist, filled with rage and willing to give his life for the Cause?

6. Omar warns the narrator: “Fight for your country, not against the whole world…. If you want to avenge an offense, don’t commit one”
[p. 182–3]. What role does Omar play in the novel? Why is he so important, even though he is a minor character? What terrible ironies are involved in his murder?

7. How does Khadra build and sustain suspense throughout the novel?

8. During a heated discussion at the café in Kafr Karam, Doc Jabir says that “the world is run by the forces of international finance, for which peace is equivalent to layoffs” [p. 35]. Later, Omar tells the narrator that “all nations are victims of the avarice of a handful of multinational companies” [p. 182]. In what ways, and to what extent, do these assertions help explain the war in Iraq?

9. What different points of view about the war are represented in the novel? Look at the arguments put forth by Doc Jabir, Yaseem, Omar, Dr. Jalal, the writer Mohammed Seen, and the narrator himself. Which of these views seems, finally, to predominate? Which of them seems most convincing or most accurate?

10. What is the effect on the narrator-and on the reader-of the violence described in The Sirens of Baghdad? How is the narrator changed by the violence he witnesses? In what ways do cultural differences, and American ignorance of Islamic customs, contribute to the brutality occurring in Iraq?

11. When Shakir asks the narrator why he didn’t board the plane to carry out his attack, he replies: “I have no idea” [p. 304]. How can his failure to act be best understood? What might have caused him to refrain? Is this a satisfying way to end the novel?

12. In what ways does The Sirens of Baghdad offer a more complex and nuanced understanding of the terrorist violence in Iraq than news reports have offered? What does the novel reveal about the emotional, psychological, and cultural motivations for acts of terror?

13. Is The Sirens of Baghdad ultimately a frightening or reassuring novel? To what extent is it both frightening and reassuring, terrifying and hopeful?

Yasmina Khadra is the nom de plume of the former Algerian army officer Mohammed Moulessehoul. He is the author of six books published in English, among them The Swallows of Kabul and The Attack, for which he was awarded the Prix de Libraires and was shortlisted for the Prix Goncourt, Prix Femina, and Prix Renaudot. He lives in Aix-en-Provence, France.

These Are the Names
Tommy Wieringa

The Day of the Scorpion
Paul Scott

The Man Who Fell Into a Puddle
Igal Sarna

A Song Everlasting
Ha Jin
Back to Top