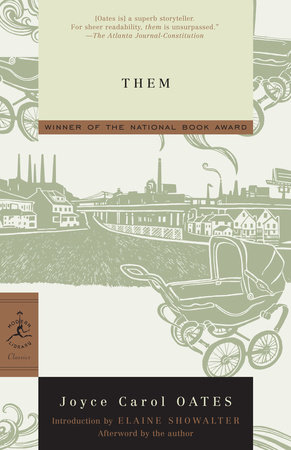 1. In his Introduction, Greg Johnson describes Joyce Carol Oates’s focus on “the inner lives of her three protagonists and the manifold ways in which their innocence and humanity are slowly eroded by the soul-destroying forces of Detroit” (p. xii). What are these “soul destroying sources”? What strengths do each of these characters–Loretta, and her children Maureen and Jules–draw on, in order to survive their challenging circumstances

2. According to Oates, the original title of them was “Love and Money.” What does love mean to the central characters of the novel? Do the women view it differently from the men? Do any characters exhibit sexual behavior that you would expect to find in someone of the opposite gender?

3. What part does money play in the novel? What does it represent to Maureen?

4. Describe the roles that Maureen, Jules, and Betty play in the Wendall family. Is Maureen a typical middle child? How much influence do Loretta and Howard have in reinforcing each sibling’s position? As the children grow up, do their traditional roles change at all?

5. Author and literary critic Alfred Kazin wrote, “Oates is unlike many women writers in her feeling for the pressure, mass, density of violent American experience not known to the professional middle class.” Do you agree? What motivates characters such as Brock, Nadine, and Furlong to commit violent acts?

6. Maureen struggles to further her education despite her poor grades, and Jules fantasizes about going to college. Why is education so important to them?

7. “[Jules] was immensely grateful for being white,” writes Oates. “In Detroit, being white struck him as a special gift . . . Only in a nightmare might he bring his hands up to his face and see colored skin. Negro skin, a hopeless brown nothing could get off, not even a razor” (p. 360). Using examples from the novel, describe how Oates portrays the racial mix in Detroit and the growing tensions leading up to the 1967 riot. Which characters in the novel clearly come from a particular social class, and where do the Wendalls fit on the social ladder?

8. After the Detroit riot, a television camera captures Jules saying, “Fire burns and does its duty” (pp. 532—33). What do you think he means?

9. Why do you think Oates put a somewhat autobiographical character named Joyce Carol Oates into her novel, and what do you make of this innovative choice? Can you think of other contemporary examples of writers putting themselves into their novels, in a fictionalized form? Discuss.

10. In her 1969 Author’s Note, a section she would later characterize (in her 2000 Afterword) as a playful piece of fiction, Oates wrote, “Nothing in the novel has been exaggerated in order to increase the possibility of drama–indeed, the various sordid and shocking events of slum life, detailed in other naturalistic works, have been understated here, mainly because of my fear that too much reality would become unbearable” (p. xxiv) What was your reaction to this powerfully graphic narrative? Did you find it realistic? Understated? Sensational

Learn More About them
print

The Broom of the System

Who Will Run the Frog Hospital?
Back to Top