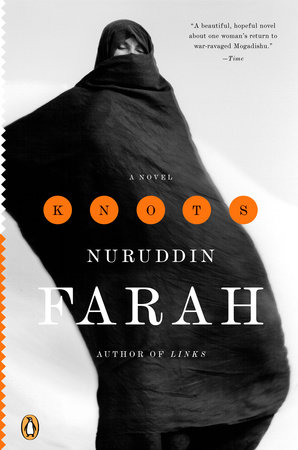 INTRODUCTION
Since United Nations forces withdrew from Somalia in 1995, few Americans have had cause to think regularly about this once prosperous nation located on the Horn of Africa. Yet, as Nuruddin Farah reveals in his absorbing novel Knots, the pain and bloodshed of civil war have continued. In Mogadiscio, the country’s beleaguered capital, gangs of adolescent boys roam the streets armed with automatic weapons. Much of the city’s infrastructure has been dismantled and sold for scrap and a simple car ride across town can all too easily end in an armed robbery or worse.

In Knots, Farah returns to the scene of his novel Links, in which an Americanized Somalian named Jeebleh returns to his native land soon after the UN pullout to settle his mother’s accounts and recover a lost portion of his identity. Cambara, the heroine of Knots, resembles Jeebleh in that she, too, hopes to restore a bit of sanity and order to the devastated city. Cambara and Jeebleh are also similar in their struggles to make sense of complicated family relationships and in their willingness to gamble their personal safety for their principles. But unlike Jeebleh, who eventually leaves Mogadiscio, Cambara is determined to stay. In a further and significant contrast to Jeebleh, Cambara is also a woman, one whose story reflects the author’s deep personal commitment to women’s rights in the developing world. Through Cambara, a person of strength, compassion, and endless resourcefulness, Farah makes an eloquent case for human rights and gender equality.

Exuding an outward air of confidence and skilled in martial arts, Cambara is no one to fool with. Yet she is as inwardly torn and conflicted as the war-ravaged city to which she has traveled. Though a native of Somalia, Cambara has long enjoyed a life of comfort and privilege in Toronto, Canada. Her life took a horrendous turn, however, when her nine-year-old son drowned in a swimming pool while his father, who was supposed to be minding the boy, was having sex with his mistress. Bereaved and angry, Cambara has returned to Mogadiscio in a move that is both a flight from her past and an effort to recover it. The core of Cambara’s mission is to reclaim her family’s handsome estate in a formerly affluent section the city, and she hopes to enlist the aid of her cousin Zaak to restore the property to its erstwhile glory. Complications, however, promptly ensue as she discovers that Zaak is virtually a slave to qaat, the regional narcotic of choice, and her family’s property has been commandeered by a violent warlord named Gudcur, who is unlikely to respect the claims of anyone who is not brandishing a gun.

Through a combination of unselfish gestures and a polite but firm insistence on her principles, Cambara gradually assembles the allies she needs to accomplish her goals. However, her progress is seldom certain. Will she fall prey to random street violence? Will she act with too much assertiveness in a land where women are expected to wear veils and submit to male authority? Or will she be destroyed by her own lingering feelings of rage and regret?

A story inspired by Farah’s own real-life quest to recover his family’s properties in Somalia, Knots deftly builds suspense and intrigue, keeping readers guessing until its final pages.

The son of a merchant father and a poet mother, Nuruddin Farah was born in Somalia in 1945. Throughout a literary career that now spans more than forty years, Farah has been an outspoken advocate for women’s rights in postcolonial Africa. He has also been a vocal critic of political corruption in Somalia and elsewhere on his native continent. Often controversial, the government of Somalia threatened him with imprisonment. During a long self-imposed exile, he taught in the United States, Germany, Italy, India, and a number of African countries. The recipient of the 1998 Neustadt International Prize for Literature, Farah now makes his home in Cape Town, South Africa. Knots is his tenth novel.

Days in the History of Silence
Merethe Lindstrom

A Bridge Between Us
Julie Shigekuni

A Sport of Nature
Nadine Gordimer

Asa, as I Knew Him
Susanna Kaysen