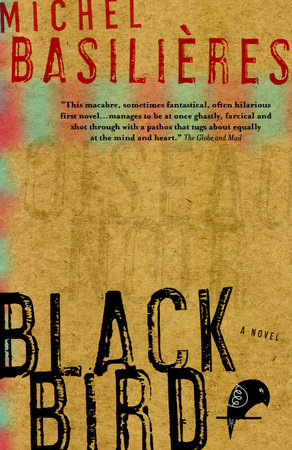 1. Many reviewers have commented on Michel Basilières’s clear love for his characters, despite the sometimes awful things that they do. How did you feel about the less-than-honourable individuals in the Desouche family (such as Grandfather the misogynistic grave-robber, or Marie the terrorist and brother-tormentor)? In what ways do Basilières’s portrayals make it hard to pin anyone down as “good” or “bad”?

2. In what ways can Black Bird be seen as a portrait of Montreal? Consider not only mentions of the physical city itself — the mountain, the streets, the invisible divisions between French and English neighbourhoods — but how the character of the city can be seen in the Desouche family’s existence and activities.

4. Throughout, Michel Basilières chooses names for his characters that are loaded with possible meanings and ties to moments in literature and Canadian history. Discuss the meanings of some of the names here, as well as the fact that some characters remain nameless (Father, Uncle, Mother).

5. Why does Aline stay with Grandfather? What solace does she find in the kitchen, and cooking? By the end of the novel, how well is she fitting in with the Desouche family?

6. Michel Basilières has been compared to writers such as Salman Rushdie, Gabriel Garcia Marquez, and Gunter Grass in his ability to weave fantastic elements into his otherwise “realistic” storylines. Discuss some of the more bizarre elements of Black Bird, and what they contribute to the story.

7. Discuss the issue of separatism as it is illuminated by the events of this novel. Who is for it, who against, and why? Could you say that the tensions between the English and the French are equalled by those between the haves and the have-nots?

8. Discuss the role of Grace, the crow. How does its shift in allegiance, to Aline, affect the household? Why does it follow Grandfather to the hospital? What kind of meanings can you build into its presence, or bring in from other familiar stories or writings? Why is Black Bird the title of this novel?

9. To what extent is Marie driven by her convictions, or by her love of family? Why does she kidnap John Cross and try to get her brother out of jail?

10. “Salman Rushdie says in The Satanic Verses that to be born again, first you have to die. It happens to a bunch of characters in the book, and they’re transformed.” — Michel Basilières. Discuss the role of rebirth, and the hope it brings, in Black Bird, considering both real and metaphorical deaths (e.g. Mother’s sleep).

11. As Basilières warns us in his Author’s Note, historical facts are used and twisted throughout Black Bird in ways that play on readers’ knowledge and associations — but of course, “Facts are one thing but fiction is another, and this is fiction.” Discuss how your knowledge of Quebec and Canadian history, or other literature, came into play during your reading, and the impact of Basilières’s twists and allusions.

12. Discuss the effect of Basilières’s humour on you as a reader. Were there specific parts of the book that made you laugh out loud? How does the lightness of the novel’s tone work with some of the more dark and dramatic events at hand?

13. Why does Basilières end the novel with the same words that open it? What do you think of the link suggested between Jean-Baptiste and our narrator?

14. What do you think the future holds for the Desouche family?

An Audience of Chairs
Joan Clark

A State of Independence
Caryl Phillips

In the Falling Snow
Caryl Phillips

In the Time of the Butterflies
Julia Alvarez

The Friends of Freeland
Brad Leithauser

The Madonna on the Moon
Rolf Bauerdick

Diary of the Fall
Michel Laub

The Elixir of Immortality
Gabi Gleichmann

And the Word Was
Bruce Bauman

Before You Sleep
Linn Ullmann